A History of Focusing on the Future 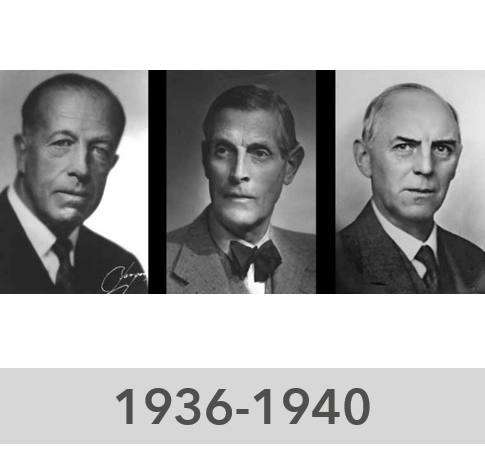 Kinnevik was founded as an investment company in 1936 by Hugo Stenbeck, Wilhelm Klingspor and Robert von Horn. At the beginning, the company’s key assets were in agriculture, candy and forestry through shares in Mellersta Sveriges Lantbruks AB, Lidköpings Konfektyr Industri AB and Korsnäs Sågverks AB. The company grew quickly through share purchases and acquisitions of businesses such as chocolate manufacturer Nordiska Suchard and iron foundry Halmstads Järnverk. 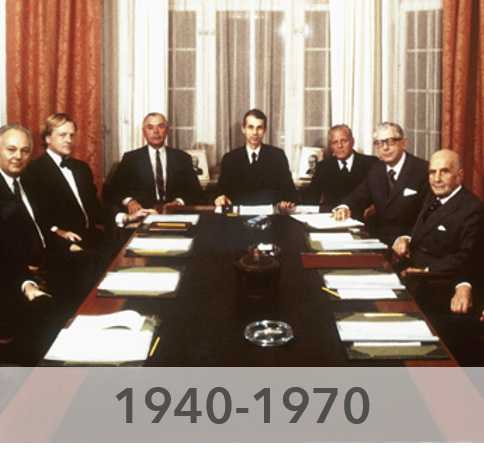 Kinnevik’s acquisition strategy of Swedish industrial companies continued during the company’s first decades. Kinnevik bought shares in companies such as Auto-Marine (Robert Bosch AB), Höganäs-Billesholm and Partner, as well as increased its ownership in existing portfolio companies, especially Korsnäs.
In 1954, Kinnevik was listed on the Stockholm stock exchange and obtained additional capital in a new share issue. A few years later, Kinnevik together with Korsnäs acquired a controlling stake in Sandviken Jernverk (today Sandvik AB). In 1960, Korsnäs acquires Marma Långrörs AB and becomes the third largest forestry owner in Sweden.

Image: Kinnevik Board meeting in the 1970s. 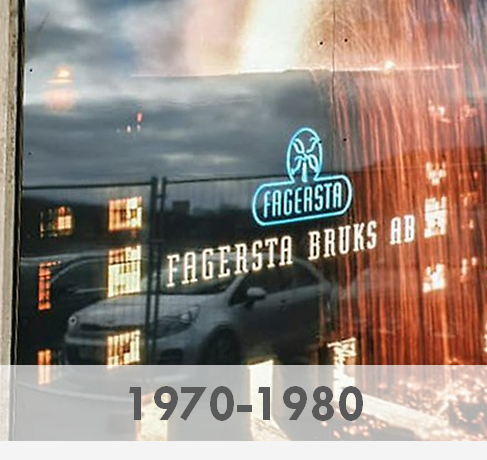 The shareholding in Sandvik AB increased steadily during the late 1970s, while Kinnevik also increased its position in Fagersta AB.
A major holding in the insurance company Atlantica was acquired in 1978.
Several auto companies were acquired in 1980 and were gathered under the name Svenska Motor AB. This included the import and sales of Toyota vehicles.

In the early 1980s, Kinnevik founded Comvik AB, launched a new mobile telephony system and, after a number of legal battles with state-owned Televerket, gained a favourable ruling by The Supreme Administrative Court. In 1985, a satellite system for television distribution was completed and during the late 1980s the battle intensified with the state-owned monopolies in telecommunications, television and radio.
Skånska Cementgjuteriet (today Skanska) acquired a corner in Sandvik AB in 1983, resulting in Kinnevik selling Sandvik but retaining and strengthening its stake in Korsnäs.
On New Year’s Eve 1987, TV3 sent its premier broadcast from London and Comvik obtained authorisation to start a new mobile telephony network in 1989.
In 1990, Kinnevik founded Millicom International Cellular S.A. (MIC) by combining the international licences of Millicom Inc. and Comvik International. MIC became a pioneer in mobile phone technology globally.

Image: Advertising for telecom operator in Hong Kong, where Kinnevik got a license. 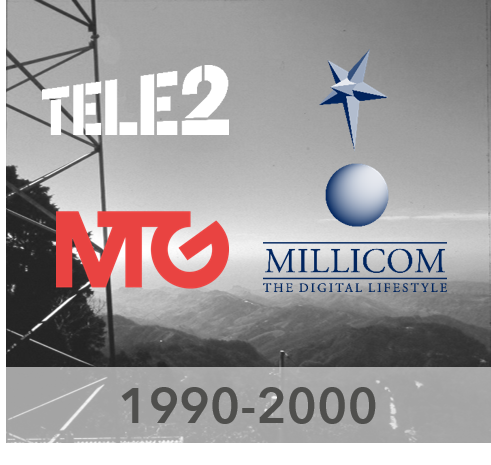 The first Kinnevik-run radio broadcasts began in 1991. In the same year, Kinnevik became the largest owner in newly established Swedish TV channel TV4 with a 20 percent shareholding. In 1995, Kinnevik founded customer services provider Transcom as well as freesheet newspaper Metro International.
Tele2 was was founded in 1993 and listed on the Stockholm stock exchange in 1996, after becoming a household name across Europe. Shortly after, MTG was incorporated as a subsidiary of Kinnevik, having previously been a business area (Kinnevik TV & Media). MTG was spun-off to shareholders in 1997 and listed in Stockholm and New York.
By the mid-1990s, Millicom had secured mobile licenses in Cambodia and Honduras, and had operations in 20 countries. By the turn of the century, Millicom was expanding in Africa, Asia and Latin America and MTG and Tele2 continued to grow. 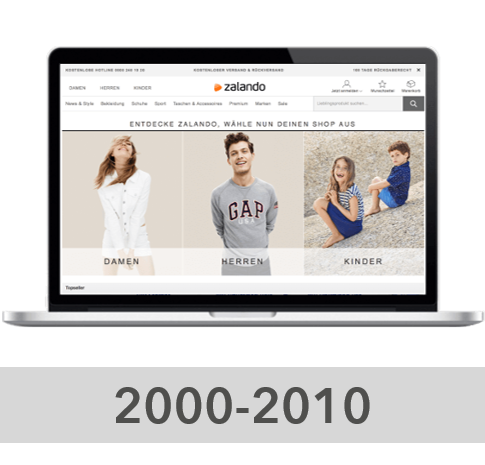 Kinnevik divestst most of its forestry assets and increases its focus on mobile telephony and media. The two investment companies Invik and Kinnevik  merged in 2005. Kinnevik focused on new investments in online, agriculture, microfinance and renewable energy. At this time, the foundation was laid for investments in a number of internet businesses, particularly e-commerce companies and market places. In 2007,  the Russian marketplace Avito was founded and in 2010, Kinnevik made its first investment in German fashion e-tailor Zalando. 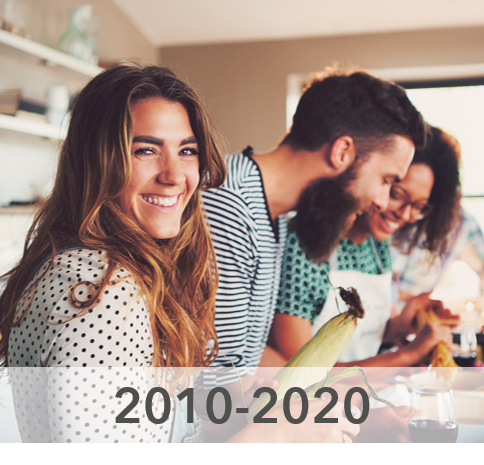 Kinnevik’s focus on e-commerce and internet companies was further strengthened in the 2010’s with significant investments in Zalando, Avito, Rocket Internet and Global Fashion Group, among others. In 2013, Kinnevik sold all its remaining shares in BillerudKorsnäs, further increasing the share of online in its portfolio. Zalando and Rocket Internet, two Kinnevik-backed companies, made their Initial Public Offerings (IPOs) on the Frankfurt Stock Exchange in 2014.
During the second half of the 2010’s, Kinnevik made several new investments in digital healthcare and financial services, as well as in online food. In 2018, Tele2 merged with Com Hem and later the same year, in order to facilitate the merger Kinnevik distributed its shares in MTG to its shareholders. In 2019, Kinnevik distributed Millicom to its shareholders as a result of a strategic pivot to focus on unlisted growth companies.
At the close of the decade, Kinnevik’s portfolio consisted of two central platforms, Zalando and Tele2, and a set of growth companies across its focus sectors, including among others Babylon, Livongo, Betterment, Monese, MatHem and Kolonial. 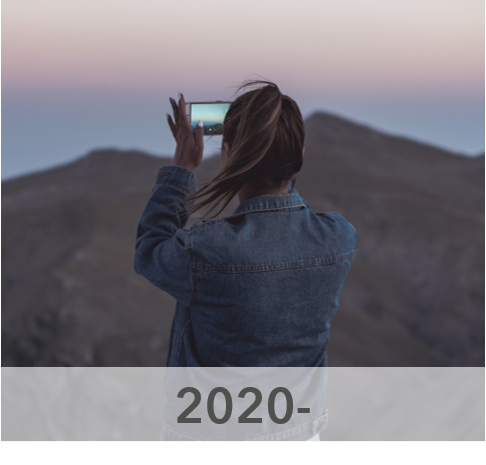 In the beginning of the new decade, Kinnevik has continued its pivot towards becoming the leading European growth investor. With the Covid-19 pandemic, the world has experienced a significant acceleration of digital consumer behaviours, having a material impact on demand for in particular digital healthcare and online groceries. During the second half of 2020, Livongo and Teladoc merged to create a comprehensive platform for virtual healthcare delivery.
Having been a part of Kinnevik’s DNA for many years, sustainability is becoming increasingly important and Kinnevik has set ambitious targets with regards to diversity and inclusion and climate in order to future-proof its portfolio, drive change in the broader industry and seize the opportunities of an increasingly conscious customer base.
In 2021, Zalando was distributed to shareholders, furthering Kinnevik’s strategic transformation by balancing a larger share of the portfolio towards younger, disruptive and technology-enabled growth and venture capital businesses.

to make the website work in a good way. Cookies are used, among other things, to save your settings, analyze how you surf and adapt content to suit you and certain cookies come from companies we work with. You can change your consent at any time on the Personal data & Cookies page.